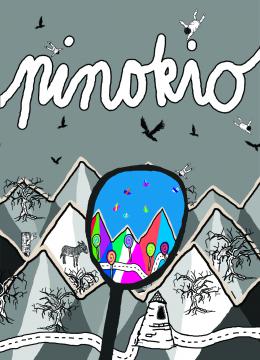 The story follows the growing up and maturation of the wooden puppet Pinocchio (Jelena Petrović), which, thanks to a lot of sacrifice and love of Master Gepetto, manages to deal with the challenges of the world around him. In 1883, Italian writer and journalist Carlo Collodi published a novel "The Adventures of Pinocchio", which gained popularity worldwide only after his death, and today is one of the most read and translated works of literature for children. The play was written by Slobodan Obradović and directed by Ksenija Krnajski. Marija Karaklajić gave her contribution as playwright.

Ksenija Krnajski was born in 1977 in Novi Sad where she also completed the High School “J. J. Zmaj”. She graduated in stage directing from the Academy of Arts “Braća Karić” in the class of Professors Nikita Milivojević and Anita Mančić.  She assisted Egon Savin in directing J.B. Singer’s "Demon” (National Theatre, Belgrade) and Slobodan Unkovski in directing "Rails" written by Milena Marković (Yugoslav Drama Theatre).
She is member of the editorial board of Theatrical Magazine “Stage” and an associate of NADA Project that deals with the advancement and promotion of modern playwriting.

A WORD FROM THE DIRECTOR

Collodi’s “Pinocchio” is educational and slightly moralistic (in line with the time when it was created), but unlike its American alter ego – Walt Disney’s animated film made in 1940, it is much darker, more Gothic.  Apart from dealing with the topics of maturing, resisting or submitting to temptation, it is also a story about ephemerality, death, and Kafkian injustice of the world we live in.
Slobodan Obradović wrote a lively and very cheerful drama for children by combining the motifs from the original Collodi’s story and the relaxed and modern dialogue used in the well-known Disney’s version.  Precisely this new dimension created by Obradović in our contemporary time is an exciting proof that “growing up and maturing”, which is the main topic of “Pinocchio”, do not depend only on events and facts, but equally on our angle of perception.
While I was working on this performance, my angle of perception changed shifting from the classical narrative towards slightly “documentary”. It seems important to me to strip off the glamour dragging behind the great world fairy tales like a veil.  I don’t mean just visually, but also from within.  You will attend a simulation of one of our rehearsals of “Pinocchio” by Slobodan Obradović.  As is the case with growing up, sometimes the very process of revelation is more precious than the result itself.
Ksenija Krnajski

Carlo Collodi, Italian writer and journalist (1826-1890) published his first stories about a wooden puppet called Pinocchio in 1881 in the “Journal for Children”.  Encouraged by their success, in 1883 Collodi published a novel entitled “The Adventures of Pinocchio”.  The novel won world fame only after its author’s death and currently it is one of the most widely read and translated pieces of literature for children. The story about the wooden puppet that encounters numerous temptations and by learning how to overcome them, matures and becomes a real boy has had numerous literary, film and musical versions. Among the best known ones are: “The Golden Key or the Adventures of Buratino” by Aleksey Nikolayevich Tolstoy and animated film “Pinocchio” (1940) by Walt Disney.
In the second half of the 20th century, interpretations appeared according to which Collodi’s novel was not classified only as children’s literature, stressing its literary and historical dimension.  Writers and literary theoreticians such as Giorgio Manganelli, Antonio Tabucchi and Umberto Eco draw a parallel between the story about Pinocchio and Bible legends, late ancient satire and renaissance literature. According to these interpretations, the character of Pinocchio is a variation of the character of a jester. By depicting human weaknesses, the typical character of a jester stigmatizes social anomalies and encourages the reader to self-reflection.

He was born in 1826 in Florence as Carlo Lorenzini.  His father Domenico was a cook and mother Angela Orcari worked as a servant.  Lorenzini chose the pseudonym Collodi after the village in Tuscany (Italy), the birthplace of his mother where he had spent his childhood and finished primary school.  Having completed school, Collodi studied to be a priest, but found a job as a bookseller.  Collodi entered politics soon due to the growing movement for the unification of Italy.  At the age of 22 he became a journalist who worked for the movement.
“Il Lampione” (“The Street Lamp”), a newspaper he launched in 1848, ceased to be published soon based on the order of the Duke of Tuscany. It was restarted in 1860.  His other newspaper, “Il Fanfulla” (“Skirmish”), had better luck.  After the unification of Italy in 1861, Collodi abandoned journalism.  In the period 1856 - 1887, he wrote several books, but became known only towards the end of his life.  He entered the world of children’s literature in 1875 by translating Perrault’s fairy tales such as “The Sleeping Beauty” and “Puss in Boots”. In 1876 he wrote “Giannettino”, inspired by Alessandro Luigi Parravicini’s “Giannetto”.
Collodi died on 26 October 1890 and was buried in Florence.  After his death, a national foundation was founded under his name and a park was dedicated to Pinocchio.

PINOCCHIO – a small pine-tree; the tree Pinocchio was carved from
COCKAIGNE (The Country of Playthings) – a land where people do not have to work but overindulge: devour sweets, drink, smoke, gamble; a land where boys become donkeys
PINOCCHIO PARADOX – a version of the so-called “liar paradox”; it occurs when Pinocchio says: “My nose is growing”. If Pinocchio is telling the truth, his nose must be growing. But Pinocchio's nose does not grow when Pinocchio is telling the truth, but only when he is lying. If Pinocchio’s nose is not growing and he claims that it is, it means that Pinocchio is lying and then his nose is indeed starting to grow. But if Pinocchio's nose is growing, it means that Pinocchio is indeed telling the truth. The Paradox was formulated in 2001 by an eleven-year-old girl Veronique Eldridge-Smith, the daughter of Peter Eldridge-Smith, Logics Professor at the Australian National University.