Little Theatre "DUŠKO RADOVIĆ" has been located at the present address since 6 June 1968, when it occupied the first purpose-built children's theatre building in Yugoslavia, built according to the design of one of our most respected architects Ivan Antić. The opening of the new theatre house for children and youth put an end to the wandering of Belgrade Puppet Theatre. It was named Little Theatre on 28 December 1967. Its name Little Theatre suggests its purpose, which is to address young audience. 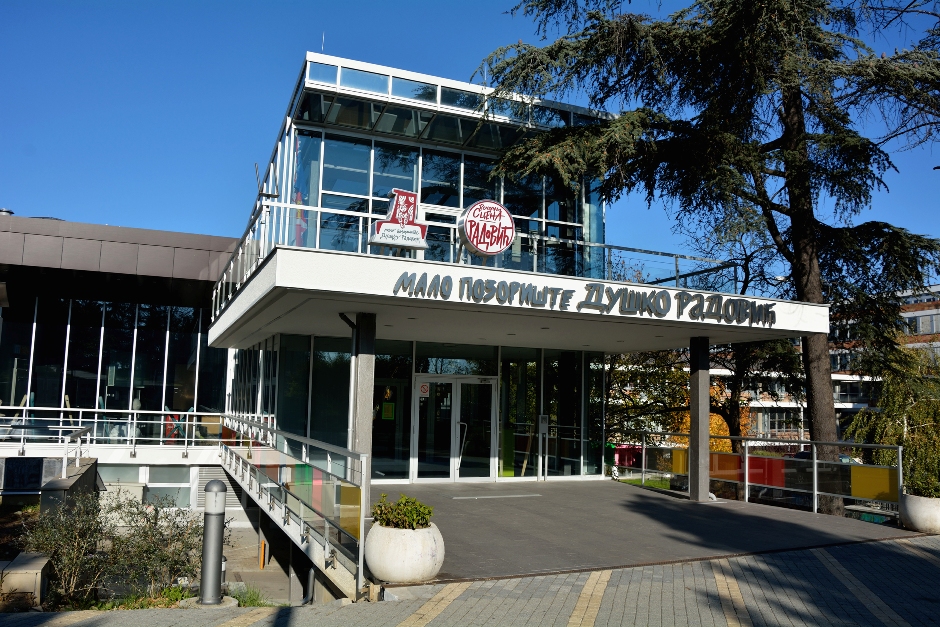 “The intention of this unpretentious name is not only to indicate the target audience, but also to associate it with the education of children towards becoming competent theatre spectators, while allowing the freedom of a comprehensive artistic expression addressed to both children and adults, and all this in order to counter the traditional and conventional and engage in the search for new fields of theatrical arts”, said Majo Djurović, the first manager of this theatre under the new roof. Using many forms, such as marionettes, Guignol puppets, stick puppets, shadow theatre, masks, black theatre, abstraction, confrontation of puppets and actors as live partners, has allowed the fostering of different genres and brought a great reputation to the theatre in many countries across Europe. After the death of writer Dušan Radović, on the Theatre Day - 23 October 1984 the staff of Little Theatre decided to name the theatre after him. The same year, the theatre director Primož Bebler was elected manager of Little Theatre Duško Radović. This man of enormous theatrical energy and culture managed to transform a small puppet stage, gathering a huge number of exceptional theatre artists. In addition to the Children’s Scene, he established the Evening Scene Radović, which was opened on 7 March 1986 with the performance Mystery ... Belgrade, directed by Ivana Vujić and written by Vladimir Mayakovsky, Dušan Radović, and Slavenka Milovanović. The Evening Scene has become one of the most interesting stages in Belgrade, absolutely open to innovative ideas and experiments, driven primarily by the desire to create an artistically meaningful and uncompromising theatre. In the nineties, with the beginning of wars and sanctions, all forms of international cooperation disappeared, while the puppet play production decreased. Dramatist and playwright Stevan Koprivica as theatre manager promoted drama performances at the Children's Scene, leaving the Evening Scene to the performances of theatre company "Kuguar". Little Theatre Duško Radović is the only Belgrade theatre that sustained damage in the bombing of RTS building in the night between 23rd and 24th April. The engagement of theatre director Anja Suša as artistic director of Little Theatre (2002) resulted in the apparent revival of the Evening Scene based on the solid repertoire concept. The first performance on the Youth Scene, as part of the Evening Scene, which targeted teenage audience and premiered on 25 January 2003 was “Sex for Beginners”, based on the book of Jasminka Petrović. It was adapted by Jelena Mijović and directed by Alisa Stojanović. The Youth Scene, modelled on the European theatre scenes, focused on contemporary drama texts, provocative and socially engaged. The theatre opened its doors to a group of extremely talented but also highly educated artists, who transformed it into a big and creative workshop. International cooperation with cultural institutions from Denmark and Sweden is also significant. The reconstruction of the main building in Aberdareva Street was completed in late 2014. It was equipped with the modern stage mechanics and lighting. Besides the main stage, there is an additional space created from the adapted entrance hall that can be transformed into a small stage with removable seating. The project of reconstruction was modelled on the best European theatres, taking into account to fit the new appearance of the building into the atmosphere of Tašmajdan park. According to Alek Rodić - current manager, long-time theatre crew member, who completed his acting and puppetry studies in Sofia, Bulgaria, at the National Academy for Theatre and Film Arts (NATFIZ): "We're a little theatre, but we cast a long shadow". In memory of theatrical beginnings, Little Theatre grants annual awards to its crew members and guests for outstanding artistic contribution, named after the most deserving pioneers of puppetry - Božidar Valtrović (amateur actor, founder of the Puppet Theatre of the People’s Republic of Serbia) Milena Načić (Little Theatre actress and member of the first permanent ensemble) and Marija Kulundžić (theatre director). In the good old spirit of Radović, the theatre continues to work with the best!