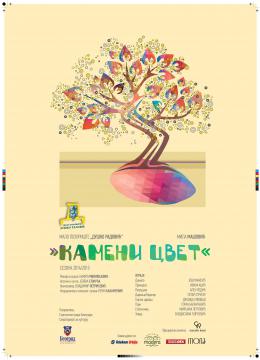 The famous Russian (Ural region) tale of damnation of those who search for treasure and wealth has been told in many ways. However, what you see in our Little Theatre is a contemporary adaptation - the performance conveys the message to children that the most valuable things in the world are not material ones and that love is most important. One of our leading directors Nikita Milivojević directed this performance and designed its set, while the script was written by Mila Mašović-Nikolić.  The project is a novelty on the Belgrade scenes for children because a modern form of storytelling is used instead of classical theatre techniques. It is performed by eight actors from our ensemble, and for the first time on the stage of our theatre we have a young actor Petar Strugar.

”The Stone Flower” is inspired by the famous Russian fairy tale, written by the playwright Mila Mašović and staged on the Children’s Scene of Little Theatre Duško Radović by Nikita Milivojević, one of our leading directors. This project is a novelty on the Belgrade scenes for children because a modern form of storytelling is used instead of classical theatre techniques. This type of performance entails high acting targets because the entire theatrical illusion is built through a complex combination of acting and puppet animation. The cast consists of six actors from our ensemble and two guest actors. The main characters are master Petruško and his young apprentice Danilo, spoiled Princess and her Nanny, and evil sorceress Mountain Empress. This performance conveys the message to children that the most valuable things in the world are not material ones and that love is most important.

Mila Mašović was born in 1983 in Niš. She writes plays for children and adults. She graduated from the Belgrade Faculty of Dramatic Arts, Department of Dramaturgy in 2010, and from the Faculty of Philology, Department of General Literature and Theory of Literature in 2007. At the Institute for Theatre, Television, Media and Film in Belgrade, she was engaged in scientific work in the field of theory of dramatic arts, media and culture, as a PhD student and holder of scholarship granted by the Ministry of Education and Science of the Republic of Serbia. She won numerous literary awards, including: Branko, Selenić and Kulundžić Awards. She is most proud of the prize awarded by the children’s jury at the festival in Kotor in 2008. She won the prize for the original script for children at the festival "Zvezdarište" in Belgrade, in the same year. She wrote numerous drama texts for radio and theatre. She is the author of a number of original radio plays, of which the most important are: "Faster Than a Bullet - the First Serbian Marathon Runner", Radio Belgrade: 2009; "One - Female Drama", Radio Belgrade: 2010; Premières of plays for children: "Wild Worm", Little Theatre "Snail", Belgrade: 2008; "Gulliver’s Travel", Pinocchio Puppet Theatre, Zemun: 2009; Premières of plays for the Evening Scene: "Hormones", City Theatre KIC - Budo Tomović, Podgorica: 2014. She lives and works in Belgrade.

A WORD FROM THE PLAYWRIGHT

We have all heard the saying CHILDREN ARE OUR GREATES TREASURE. But what is a REAL TREASURE for our children? Children will usually say that their TREASURE is what they own and not what they are able to do. It is sad, but true.
From their earliest childhood our children long for a variety of stone flowers of our modern society. Stone flowers are springing up everywhere - in the form of expensive toys, expensive tennis shoes, expensive clothes, expensive entertainment; they are springing up in the TV commercials interrupting children's and educational programmes; they are springing up in the street, in supermarkets. Stone flowers are often imposed to children also by those who love them most - parents, grandparents, friends. By growing up among these flowers, one day children themselves are transformed into one of them - a stone flower that is neither skilful nor able to do anything independently, and that only wants to be admired by other people.
Telling the old Ural fairy tale from the beginning, I have tried to give it not only a new dramatic form, but also a new meaning. The stone flower is a metaphor for a shopaholic spirit in which we raise new generations of children. Watching this play, instead of longing for material things, children will begin to fantasize about their accomplishments, their works, created by their hands, their effort, courage, perseverance and love.
When you love someone with all your heart
Show your love with some daring deeds
Don’t be cack-handed
Remember that fortune favours the brave
Without love the Earth is just a stone
Without love the Sun is just a flame
Without love the Moon is just a phase
Without love the human being is just a rock
Every love is a fairy tale
But only one is made for you
Hence, don’t let anyone ever lie to you
Do only what your heart tells you to do