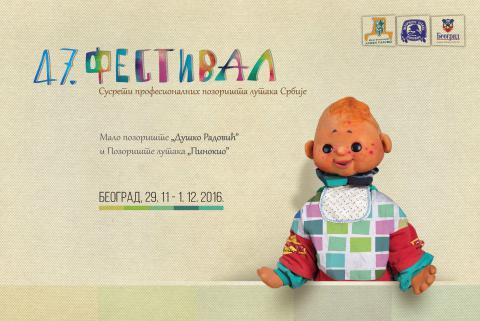 On Tuesday, 29 November, the 47th Festival of Professional Puppet Theatres in Serbia will begin. This year’s hosts are Little Theatre Duško Radović and Pinocchio Puppet Theatre.

During the three-day festival, the audience will have a chance to see a total of ten performances from Subotica, Novi Sad, Zrenjanin, Kruševac, Niš, Banja Luka and Belgrade.

The prizes in ten categories will be awarded by the jury consisting of Slavčo Malenov (President), Prof. Zoran Djerić, PhD and Boris Čakširan, while the Children's Jury will award three prizes (The Loudest Applause, The Super Best Show and The Puppetry Magic).

In addition to the main programme, the Festival has a side programme that will consist of four puppet workshops for children, photo exhibition “Festival in Focus” and the exhibition of puppets created by the students of the Faculty of Applied Arts, as well as the promotion of publications dedicated to puppetry: all publications of the International Festival of Children’s Theatre in Subotica including the publications issued jointly with the Theatre Museum of Vojvodina, and the newspaper for puppetry arts “Strings”.