Мilena Depolo
(based on the idea of Dragoslav Todorović) 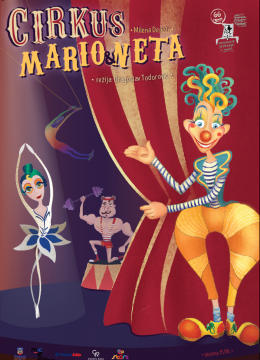 The show is an ode to marionette, its beauty, subtlety and expressive possibilities. Circus acts, acrobatics, dancing on the wire, assembling, disassembling, juggling, etc. are in the foreground. The story seems to be a decoration. It is a story about love and about some crazy artists, that is - all of us. Shakespeare said: “All the world's a stage”, and we say: “All the world's a circus arena”.

A WORD FROM THE DIRECTOR: BALANAC -  THE MASTER OF STRINGS

While a bunraku puppet is the perfection of Japanese puppetry skills and understanding, a marionette is the subtlest product of global, and especially European, puppet art. A puppet made of wood and polystyrene in the hands of an actor animator can make it look like rubber. It is a classic puppet that hides a vast number of tricks, more than any other type. But what does it take to create a new puppet - a marionette in this case? First, it is necessary to make drawings of the given character. In this case, it was the task of young and exceptionally talented designer Irina.  In order to add magic to the puppets, it is necessary to have a wizard. It is our master puppeteer Darko. Being able to string the puppet in the right way is a special gift. Our excellent ensemble was able to show all its acting and animation skills precisely because the puppets were stringed by an ensemble member, actor and excellent marionettist Goran Balančević who celebrates with this show 35 years of artistic work in the theatre. Since I had such a creative and enthusiastic team, we created this play joyfully. Therefore, I sincerely hope that our vision of a special MARIONETTE circus will cheer you up.
Dragoslav Todorović

She was born on 18 July 1981 in Belgrade. She graduated from the Faculty of Dramatic Arts in Belgrade, Department of Dramaturgy in 2006. Since the season 2006/07, she has been permanently employed in Boško Buha Theatre where she has focused on children’s and youth theatre and cooperated with the directors of all generations. She is a member of ASSITEJ Serbia where she develops programmes to promote the creative work for children and youth.
Performances: “Characters” (City Theatre, Podgorica, 2003), “Karma Coma” (Dadov, 2004), “Fairytaledrome” (Boško Buha Theatre, 2007), “Who is Laurette?” (Little Theatre Dusko Radovic, 2009), “They Wanted Something Entirely Different” (In Stage, 2009), “School of Rock and Roll” (Boško Buha Theatre, 2011), “The Ant and the Grasshopper” (Pinocchio Puppet Theatre, 2011), “They Have Suffered” (Belgrade Drama Theatre, 2013), “Fear is a Great Inventor” (Boško Buha Theatre, 2014), “Rabbit, Turtle & Co.” (National Theatre Toša Jovanović, Zrenjanin, 2015), “The Little Red Riding Hood” (Boško Buha Theatre, 2015), “The Wizard of Oz” (Boško Buha Theatre, 2015).       She was a playwright for several performances. She has also written scripts fortelevision shows (“Podium”, “We are the Team”) and series (“Something Like Love”, “A Single Man in Marriage”, “Open Door”, “One Summer Night”), various events, and she cooperated with several magazines (Fame, Cosmopolitan, Playboy). The TV series “A Single Man in Marriage” was translated into a film entitled “When Love Comes Late”.
Awards: Josip Kulundžić prize (FDA, 2004), the prize for script development in 2006 (Serbian Film Centre, 2006), the best text award for “The Ant and the Grasshopper” (Zvezdarište Festival, 2012). The play “They Have Suffered” was performed in many festivals and received many awards in 2014 (The Yearly Award of Belgrade Drama Theatre, The Sterija Audience Award, the Step Towards Courage Award in Banja Luka, The Best Play Award in Mladenovac Festival). She was also awarded the Best Female Achievement for the film “When Love Comes Late” in the festival BaNeFF in Stockholm.

It has turned out that this is the fifth puppet show for which I write the text, the third one in cooperation with Dragoslav Todorović and the second text in Little Theatre Duško Radović. Enough to make anyone think that I am an expert in puppetry. Hmm... I wouldn’t dare claim that. However, I’m sure that dealing with puppetry is a big and fun adventure. It looks like a cartoon. Puppetry can go very far, both thematically and visually, and in every way. I hope that such a path is still ahead.
The show is an ode to marionette, its beauty, subtlety and expressive possibilities. Circus acts, acrobatics, dancing on the wire, assembling, disassembling, juggling, etc. are in the foreground. The story seems to be a decoration. It is a story about love and about some crazy artists, that is - all of us. Shakespeare said: “All the world's a stage”, and we say: “All the world's a circus arena”.
Milena Depolo