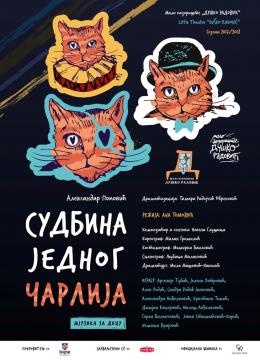 One night, Yellow Mum Cat leaves her kitten on the dock, in front of a large white ship that should sail from the port the next day. She wants her son to become a ship cat and see the world, instead of ending up as an ordinary butcher's cat. The next morning, the frightened cat is found by Violet, the captain's daughter, who names him Charlie. This is when his adventures begin.

A WORD FROM THE DIRECTOR
The famous novel by Aleksandar Aca Popović “Charlie’s Fate” is charged with strong emotions familiar to every child and every adult: fear of abandonment and longing for the mother; intimacy of inseparable friendship; love for which great things are done; pride of success and getting carried away with fame, sadness for separation, but also consolation for returning to the mother’s lap. Initially, Charlie is an immature kitten, cruelly left to take care of himself, but eventually he becomes a cat with a rich life experience. The end, although full of emotions, conveys a gentle philosophical message that it is better to experience life than to stay forever attached to one’s parents, because this experience of life, although sometimes difficult, is at the same time the most beautiful in the world.

Ana Tomović
A WORD FROM THE AUTHOR
My mother gave me Aca Popović's book "Charlie’s Fate" in my third grade of primary school during the summer vacations; it happened exactly 31 years ago. I still remember the pictures created in my mind while I was reading it for the first, second and any other time. I remember them so clearly that it seems to me that Charlie was my friend and not just a cat from the story. And as if he was real, not fictitious.
I remember myself imagining to talk to every Violet from the story, and now I realise that this was my attempt to understand everything that Charlie himself tried to do in the story - to understand this life of ours with all the beautiful and terrible things that each of us experience.
I still do not understand how that book has survived all these years, all the movements and changes, but although its pages have turned slightly yellow, it keeps breathing on my desk, just like that summer.
My choice of this Aca Popović’s work in fact derives from my desire to share these inner images that have followed me throughout life, reflecting my experience of the endless charm of Charlie the cat: his innocence, his courage, his rolling through various life situations and finally that moment of peace.
Tamara Radojčić
A WORD FROM THE PLAYWRIGHT
This play is intended exclusively for children over five years of age, as well as for adults who are ready to embark on a journey with Charlie the cat and see our world through the "cat's eyes". This "bottom" perspective reveals all the beauty of success and all the horrors of the fall that can befall anyone who wants to experience something more in life.
Back in 1976, a play about Charlie the cat was performed for the first time on the stage of  Little Theatre. The audience was then shocked by the "sad end" of a play for children.  In the present remake, the authors interpret Aca Popović's novel in a new way, showing us that the experience we are acquiring while growing up, and also while getting older, is the most valuable thing that can happen to us in our lives. Towards the end of life path of each of us, including Charlie the cat, the only thing that permanently remains to us are our memories.
Мila Mašović-Nikolić
ABOUT THE AUTHORS
Аna Tomović, born in 1979 in Belgrade, graduated in stage and radio directing at the Faculty of Dramatic Arts in Belgrade.
She directed plays based on to the works of classical authors: Bertolt Brecht (Mother Courage and Her Children), F. M. Dostoevsky (Crime and Punishment), William Shakespeare (Romeo and Juliet), Giovanni Boccaccio (The Decameron), Georg Büchner and Ernst Toller (Woyzeck - Hinkemann Case), Arthur Schnitzler (Casanova’s Return), Ingmar Bergman (Autumn Sonata), etc. and contemporary dramatists: Milena Marković (Boat for Dolls), Filip Vujošević (Half-Life and Ronald, Please Understand Me), Doruntina Basha (The Finger), Stella Feehily (Duck and Мonogamy), Luc Hibner (Creeps), Igor Bauersima (Norway. Today.), etc.
She worked in the Belgrade theatres:  Yugoslav Drama Theatre; National Theatre; Atelier 212; Belgrade Drama Theatre; BITEF Theatre; Little Theatre Duško Radović; Boško Buha Theatre; Serbian National Theatre in Novi Sad; Sombor Theatre; Theatre Oberhausen in Germany and Croatian National Theatre Ivan pl. Zajc in Rijeka, etc.
She participated in various festivals: BITEF, MESS, Die Neue Stücke aus Europa in Wiesbaden, European Young Directors Forum in La MaMa Theatre in New York, Sterija Theatrical Festival, Borštnikovo srečanje, Joakimfest, Yugoslav Theatre Festival in Užice, Desire Festival in Subotica, etc.
She was an assistant director on the project Fast Sicher directed by Bobo Jelčić and Nataša Rajković at Theater am Neumarkt in Zurich in 2007 and on the project Endstation Sehnsucht directed by Stefan Kimmich in Thalia-Theater in Hamburg in 2008.
She won two Joakim Vujić awards for direction. Her play Boat for Dolls was a winner of the 54th Sterija Theatre Festival in 2009 (where it won 7 awards), while her play Mother Courage and Her Children was proclaimed the best play in the season 2013/2014 of the National Theatre in Belgrade.
She was an associate scriptwriter for the film Nobody's Child, directed by Vuk Ršumović, which won over 30 international awards.
In Little Theatre Duško Radović, she directed the Witches of Roald Dahl in the season 2010/2011.
Tamara Radojčić Obrenović was born in 1978 in Belgrade. She studied German literature at RWTH Aachen (Germany) and dramaturgy at the Faculty of Dramatic Arts in Belgrade. She worked as a co-screenwriter of numerous TV series and shows for children and youth. She wrote newspaper columns on interpersonal relations and actively participated in cultural projects for children and young people - URA KULTURA (Hurray Culture). She is the author of the blog "Gaga Blues", where she discusses parenting with numerous readers.
She speaks four languages, has four children and currently lives, works and writes in Prague.