KARLSSON ON THE ROOF

KARLSSON ON THE ROOF 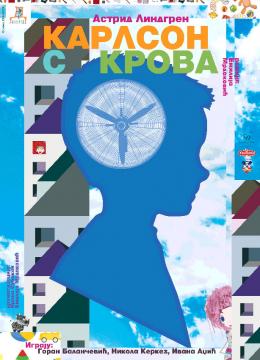 Astrid Lindgren and her characters speak a specific children's language where genuine perceptions of the world are inseparable from children's imagination and often misinterpreted by adults.  The main character of Karlsson on the Roof is the Kid, a boy who has a lot of toys, but no one to play with. His sister cannot be his friend because she is too busy growing up too soon, while his parents think they gave him enough because they bought him all trendy stuff.
It may sound a bit shocking, but in the developed countries there are continuous discussions about whether climbing trees or walking to school unaccompanied should be legally prohibited to children. This story is about half a century old, but it seems that the conditions of growing up are even more unbearable nowadays; children are isolated in apartments in an attempt to be protected, while the fast pace of living does not leave enough time to adults to educate their own children. In this theatrical adaptation, we have tried to focus particularly on the world of consumerism that makes decisions for us, regardless of our awareness of that fact, and to show that this is not a favourable world for children who want to explore while growing up and who seek sincere connections with nature and people around them. When they do not get it, they manifest all kinds of problematic but authentic child's behaviour.
We saw the Kid's cry for a dog as his desire to contact a real, natural world and a real friend.

A WORD FROM THE DIRECTOR
This is a wonderful story about an ordinary, little and lonely boy from the Svantenson family who dreamed of a true friend. He loves his parents and is generally a very obedient boy.
But suddenly, as fast as the wind, marvellous, irresistible and ill-mannered Karlsson appears, eager to have fun. Of course, his actions are not always appropriate, but he is a friend, and one has to love a friend the way he is. Our main character the Kid is convinced of that. Everyone thinks that Karlsson is a fiction, a fantasy for babies. However, the Kid does not doubt the existence of his dear friend.
His adventures are wonderful and funny. This story teaches us to be faithful and committed friends.

ABOUT THE DIRECTOR
Emilija Mrdaković completed basic studies majoring in puppetry (1990) and then acquired master's degree in directing for puppet theatre (2004) at the National Academy for Theatre and Film Arts - NATFIZ in Sofia, Bulgaria, at the Puppetry Department, in the class of Professor  Nikolina Georgieva.
She has thirty years of experience in puppetry for children and adults. She is engaged in acting, directing, playwriting and pedagogical work. Since 1992 she has been employed as director in the Youth Theatre, Novi Sad. In December 2014 she was appointed Manager of Youth Theatre, Novi Sad.  She directed over thirty plays. She has won over 50 awards at national and international festivals.

ABOUT THE PLAYWRIGHT
Irina Subakov completed the basic and master studies of dramaturgy at the Academy of Arts in Novi Sad where she is presently employed as professional associate. She participated in various projects and workshops as writer, critic and playwright, the most notable of which is ASSITEJ Serbia project "Stories from a Short Break between Classes", which resulted in the publication of a collection of drama texts for young people. She wrote a script for the short animated film Seesaw, filmed during the animation workshop Izbanimaonica, which won the prize at the SEE a Paris festival in Paris.  Within the framework of the international theatrical project Instant Mix Theatre she worked on a group play Global Warming (And How We Do Not Respond To It) in London, and her text The Girl and the Hedgehog was performed in the festival Les Rencontres Instant Mix in Paris.