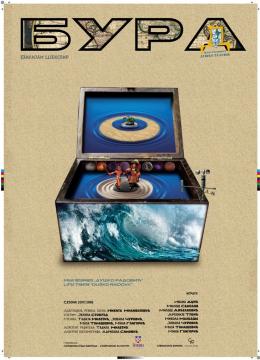 The Tempest   has many layers:   romantic, metaphysical, autobiographical, philosophical, political, etc. Among all these possible  readings I find also a childlike view of the world (like in those unusual J. Cornell’s boxes with some nostalgic mini-worlds full of some childish fantasies). Fairylike, real, unreal, possible, impossible, something  lost long time ago, “dream-making material”!

About the meaning of Shakespeare's Tempest
The well-known play The Tempest was written by William Shakespeare. It took him two years (1610-1611) to write it.
It was first published more than ten years later, in 1623. This play is about Prospero who was thrown into the sea by his brother Antonio and his accomplice Alonso, thus expelling him from Italy. Prospero finds an island where he tries to impose his power on the natives, since before the exile he was Duke of Milan, and he believes that he must retain that title even on the desert island. When this drama was written, it questioned the colonization of the Americas, but this idea was concealed by the stories about art, love, beauty and nature. For this reason, The Tempest is actually a metaphorically camouflaged political drama.
The protagonist Prospero represents European imperialists, human being or force that is imposed as "the Father of the People". He controls everything, including himself, and as a leader he must be calm, composed, rational and completely under his own control. Nevertheless, he has his defects that are manifested through the storms created by his rage and driven by his vengeance. He controls also the forces of nature, for example, water that can destroy the world, which symbolically raises the issue of social responsibility. Prospero is also a symbol of “the Omniscient". On the other hand, Caliban, forced into servitude by Prospero, represents indigenous Americans (Indians), symbolising the oppressed, ignorant and easily controlled masses by tricks and illusions. This story is also a parable about the conflict between the human instinct and the rule of culture and law.
Мila Mašović-Nikolić,
Theatre Playwright

About The Tempest on the Children's Scene
The Tempest has many layers:  romantic, metaphysical, autobiographical, philosophical, political, etc. Among all these possible  readings I find also a childlike view of the world (like in those unusual J. Cornell’s boxes with some nostalgic mini-worlds full of some childish fantasies). Fairylike, real, unreal, possible, impossible, something lost long time ago, “dream-making material”!
Nikita Milivojević,
Director

About Shakespeare
William Shakespeare was an English poet, playwright and actor. He wrote a total of 38 theatre plays and 154 sonnets. Although little is known about his life, his works such as Hamlet, Romeo and Juliet, King Lear, have had a great impact on literature and theatre for more than 400 years.
William Shakespeare was born in Stratford-upon-Avon and baptised a few days later, on 26 April 1564. He was the third of eight children and the eldest son. His father, John Shakespeare, was a successful merchant. William most likely attended school in Stratford. There is no information that he attended university. In 1582, when he was only 18 years old, William married Anne Hathaway, 8 years his senior. Their first child, Susanna, was born six months after their wedding. Two years later, they got twins, Hamnet and Judith, but their son died when he was only 11 years old. After that, there is no information about Shakespeare's life in the period1585-1592 (the so-called "lost years”). He is presumed to have moved to London, without his family, and begun his theatrical career. He built a successful career as a writer, actor and co-owner of the company of actors The Lord Chamberlain's Men, later known as The King's Men. In addition, he directed and wrote plays. He devoted his life to theatre.
There are many stories about Shakespeare, his "lost years" and his beginnings in London. Allegedly, Nicolas Rowe, the first Shakespeare’s biographer, wrote that Shakespeare had been forced to flee to London because of deer poaching accusations.
According to another story, Shakespeare began his theatrical career by grooming horses of a theatre owner in London. Other information indicates that he was a village teacher. There is no evidence that any of these stories are true.
The nobility of the 16th century England did not appreciate theatre much. However, many noblemen were patrons and good friends of actors. Fifteen Shakespeare’s plays were published by 1597. It is recorded that at that time he bought the second largest house in Stratford for his family.
He is believed to have lived in London most of the time, visiting his family during holidays, when theatres were closed. By 1599, Shakespeare and his business partners built their own theatre on the coast of the river Thames and named it Globe.
Shakespeare spent the last five years of his life in Stratford. He died on 23 April (it is supposed to be his birthday) 1616 at the age of fifty-two. One hundred and fifty years after Shakespeare's death, the question was raised whether he was the true author of all his works. William Shakespeare was a respected poet and theatre writer during his life at the end of the 16th and the beginning of the 17th century, but he gained world fame as late as in the 19th century when romanticists praised his genius, and the Victorians celebrated him almost as an idol. Shakespeare's genius lies in the fact that his works deal with universal themes that are still relevant today.