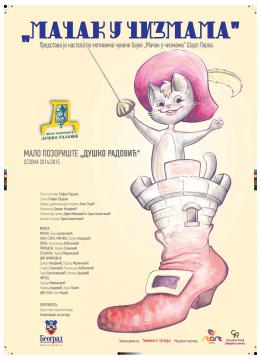 “Puss in Boots” is one of the most famous fairy tales. It has elements of a fable as it contains the personification of animals. The story is about a wise and very capable cat who uses trickery to help his master gain wealth and win the hand of a princess, the king’s only child, in marriage. The moral of the story is that despite disadvantages or difficult life circumstances, we can create the life we want by using our brains and working hard. The show ends with the words: “Children, remember and do not forget, if you really want to do something, then nobody can stop you! Is that right friends? Of course it is. Those who can catch the mouse can do anything else...”

In producing the classic puppet show for children, Little Theatre Duško Radović wants to re-establish cooperation with the Bulgarian masters of puppetry, thus re-introducing to its repertoire the values and ideas based on which the Theatre was founded back in 1948.
Script, stage direction and design were entrusted to the famous Bulgarian director Stefan Rjatkov, author of the puppet show "Puppet Programme”, broadcast on the Bulgarian National Television.
The project is aimed at pre-school and younger primary school children.

ABOUT THE DIRECTOR
Stefan Rjatkov graduated in acting and puppetry from the Academy of Puppetry "NATFIZ-Krsto Sarafov" in Bulgaria, in the class of one of the most famous professors of puppetry in Bulgaria and abroad, Professor Atanas Ilkov.
Stefan is the author of the famous series of puppet shows "Puppet Programme”, which were broadcast on the Bulgarian National Television.
In addition to being an actor, director and puppeteer, Stefan is an excellent opera singer and performs opera in the musical theatres across Bulgaria.
His multiple talents and artistic authority are the main reasons to believe that the puppet show for children "Puss in Boots" will achieve a lot of success and be a jewel in our repertoire for many seasons.

A WORD FROM THE DIRECTOR:
THE GUIDING IDEA OF THE WHOLE SHOW IS THAT NOTHING IS IMPOSSIBLE AND THAT IF WE DO OUR BEST, WE CAN EXPECT TO HAVE RESULTS. EVERYTHING IS POSSIBLE AND WE SHOULD BELIEVE IN MIRACLES BECAUSE IF WE REALLY WANT SOMETHING MIRACLES DO HAPPEN.
Remember and do not forget, if you really want to do something, then nobody can stop you! Is that right friends? Of course it is. Those who can catch the mouse can do anything else...
Stefan Rjatkov