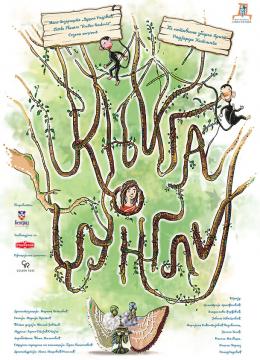 The Jungle Book is a comic puppet musical with some elements of contemporary circus for pre-school and young school-age children, directed by Marija Krstić. Through the famous Rudyard Kipling’s story about Mowgli, a boy raised in the jungle by a pack of wolves, this play deals with the issues of diversity, (non-)tolerance and community integration.
The boy Mowgli is interpreted by an actor who performs basic aerial acrobatics on the stage using the aerial silks, while other animal characters are represented by the puppets animated by actors. In this way, the topic of diversity is clearly highlighted; at the same time, the actor who interprets Mowgli, with his stylised movement, fits in among the puppets.
In this text, which is an allegorical story of survival in the jungle, young playwright Marina Ćetković offers a model for tackling and solving problems caused by peer conflicts. It is well known that the obvious differences, such as skin colour, social status and the like, can cruelly mark children from the moment they enter the peer community. The idea of this project is to promote, in a fun way, some healthy values that contribute to the normal development of the child's personality in relation to the environment, the building of an open society and the acceptance of healthy values.
The jungle portrays a model of human society with all the factors that influence the socialisation of the child (family, school, peer groups, the media, etc.). This show offers the audience the opportunity to experience an exciting adventure, full of danger and surprises, while conveying the pacifist message of tolerance and friendship in a humorous way. The cast includes Dimitrije Aranđelović, Vladislava Đorđević, Jovana Cvetković, Marijana Vićentijević Badovinac, Jelena Ilić, Nikola Malbaša, Nikola Kerkez and Nenad Radović.

ABOUT THE PERFORMANCE
The Jungle Book is a comic puppet & dramatic musical with some elements of contemporary circus for pre-school and young school-age children. Through the famous Rudyard Kipling’s story about Mowgli, a boy found and raised in the jungle by a pack of wolves, the problems of contemporary society are being questioned, such as the acceptance of diversity, racism and the inclusion of children of diverse backgrounds in the wider community.
The actor who interprets the only human figure (Mowgli) performs attractive and dynamic juggling acts with pole flags and aerial silks acrobatics, which in combination with the animated puppets/animals conjures up the atmosphere of the animal world, thus contributing to the rich visual expression.
The jungle metaphorically depicts a model of human society with some important factors that influence the process of a child’s socialisation in the family and peer group, but this modernised story deals also with the influence of the media and music genres on growing up. At the same time, the youngest audience is offered the opportunity to experience an adventure full of danger and surprises and to get acquainted with the values and significance of tolerance and friendship in a humorous way.

AWORD FROM THE DIRECTOR
This is a story about a child that is different from others.
The boy Mowgli, raised by wolves, is loved and accepted among animals, until a terrible tiger returns from captivity. Full of hatred for humans and eager for revenge for having been cruelly tortured, Shere Khan expels a human cub and separates him from his friends and family. Mowgli escapes into a dark jungle where he learns about its diversity - new animals and their unusual habits. Though he realises that he does not belong to any animal species, he finds friends among them, who help him in beating Shere Khan and expelling him from the jungle.
This show promotes tolerance and helps children find their place in the peer community, which can be as cruel and wild as a real jungle.

ABOUT THE DIRECTOR
She graduated in stage and radio directing at the Faculty of Dramatic Arts in Belgrade, in the class of Professor Egon Savin. She completed master studies in directing at the Alternative and Puppet Theatre in Prague.
She directs puppet and contemporary circus shows, radio dramas and audio books.
The most important directing projects: The Rise and Fall of Icarus Gulbenkian, Alfred ve dvvore, Prague; Aska and the Wolf, Youth Theatre, Novi Sad; The Seesaw, The Tale of the Fisherman and the Fish, Puppet Theatre Pinocchio, Belgrade; Kon-Tiki, National Theatre Kikinda, The Sandman and Psychosis, modern circus shows, Inex Theatre, Belgrade;
Vip Maštalice - audio stories for children.
Selected radio dramas: The Flyers by Dimitrij Kokanov; The Sandman by E.T.A. Hoffmann; Nonsense by Edward Lear; This is the Worst Day of My Life, The Summer I Learned to Fly and Reading Makes You Grow by Jasminka Petrović; A Glass of Bitter Brandy - Memories of Delfa Ivanić by Biljana Dojčinović; Jug, Pitcher, Jar by Jelica Kiso; Mistreatment by Ivo Andrić; Love of Mrs. von Meck by Ljubiša Vićanović, etc.

A WORD FROM THE AUTHOR
This is a comical musical puppet show based on the homonymous Rudyard Kipling’s classic of children's literature and the motives from the story about Mowgli, the boy with whom many generations have grown for more than a century. Each generation has its own version of The Jungle Book and new adaptations appear one after another.
The first task in the process of theatrical adaptation was to create a unique and original adventure using various stories about Mowgli, and to make the story fresh, surprising and contemporary, while being aware of countless adaptations and well-founded expectations associated with this title.
Some key changes were introduced by abandoning the context and discourse of Kipling’s work and by modernising the characters and the relation between the form and the style of this well-known story.
Our Jungle Book explores the actual topic of tolerance as well as the topic of identity. Persecuted by Shere Khan, embodiment of the law of the stronger, and driven by the need to belong to a group - Mowgli embarks on an adventure that is equally scary and exciting, just like growing up, and during that experience he matures and discovers the richness of  diversity and the value of knowledge, and thanks to his openness and curiosity, he overcomes all barriers and conflicts.
Unlike in Kipling's stories, where the law and order are inviolable, and therefore Mowgli, being a human cub, can never stay in the jungle, we re-examine this position introducing the idea that friendship and the feeling of belonging are above any law.

ABOUT THE AUTHOR
Marina Ćetković is a playwright and screenwriter. She graduated from the Faculty of Dramatic Arts in Belgrade, Department of Dramaturgy,  and attended the Dutch MAPA (Moving Academy for Performing Arts) in Amsterdam. She is a member of the Association of Dramatic Artists of Serbia and one of the founders of the theatrical research association Teatarmaher where she creates on the independent theatre stage of Serbia. She is an associate for the Children’s Programme of Belgrade Radio, the winner of Radio Belgrade Award for best original radio drama in 2015, and the screenwriter of award winning short films. She is active also in the field of visual arts; she participated in several art residences and collective exhibitions.