THE EMPEROR HAS NO CLOTHES!

THE EMPEROR HAS NO CLOTHES!

Based on “The Emperor's New Clothes” by H. K. Andersen 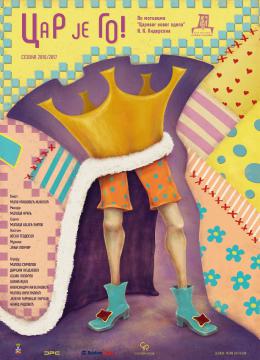 This text is based on the Andersen’s fairy tale from the 19th century. The structure of Andersen's tale "The Emperor's New Clothes" is much closer to a humorous tale than to a fairy tale. Andersen uses nonsense to create fantasy, a surreal situation and therefore his story loses the connection with realism and in terms of genre becomes a fairy tale.

Hans Christian Andersen: ”I take life and transform it into a fairytale!”
Andersen is considered the king of authored fairy tales. The authored fairy tale essentially shows a picture of the world that is uncommon in the traditional fairy tale. It shows a serious picture of the world. And then the serious content is parodied and deconstructed with humour. Also, the authored fairy tale is a fairy tale that problematizes the end. Recognising and adopting the features of the authored fairy tales, Mila Mašović wrote the original text based on Andersen’s “The Emperor's New Clothes”. Since it is not a classical fairy tale, there is no classical court or classical epoch. In the world of Mila’s fairy tale, there are irresistible (anti-)heroes, comically and painfully immature for anything serious. They live in a cultureless realm and since they are not familiar with theatre or art, their realm has been disappeared from the world map. And if a poor artist without an audience had not decided to play with them using imagination, craftsmanship and beauty, no one would have ever heard of these strange people and their absolutist emperor.
Andersen's fairy tale was published in April 1837, and this fairy tale written by Mila in April 2016. Let us have the joy!

ABOUT THE PLAY “THE EMPEROR HAS NO CLOTHES”!

This text is based on the Andersen’s fairy tale from the 19th century. The structure of Andersen's tale "The Emperor's New Clothes" is much closer to a humorous tale than to a fairy tale. Andersen uses nonsense to create fantasy, a surreal situation and therefore his story loses the connection with realism and in terms of genre becomes a fairy tale. This is exactly what makes it closely related to avant-garde literature, specifically the Theatre of the Absurd from the early 20th century. While I was writing this piece inspired by Andersen's story, I had a strong feeling that in some way I was paying homage to Jarry’s “Ubu the King”, but for children. In this sense, all the characters are shifted, comical and absurd, and any resemblance to reality is the result of the power of art to show us the general eternal truth about the defects of human nature - vanity, naivety, inability, cunningness and fear from the truth.

ABOUT THE SPACE AND TIME OF THE PERFORMANCE

"The Emperor Has no Clothes!" is set in the Lost Empire at the end of the world. In my imagination, this empire was created on the legacy of our civilization that overloads the planet with waste - the mountains of plastic bottles and terrible indestructible waste. Over time, the waste becomes golden and inhabited by the residents who glorify their heritage without understanding the essence of nature and civilization. Thus, the container becomes a throne, the buckets become furniture, and the waste is considered to be the heritage preserved by older generations for new ones. This performance, in addition to having a wonderful and interesting story about the ingenious tailor and the emperor who loved fashionable clothes, should awaken the children’s desire to preserve the environment. By mocking the absurdity of the situation where the landfill becomes more valuable than nature, the performance should make the audience understand that we need to preserve and nurture the planet for future generations, and that each of us should strive towards becoming a better person.

In designing the costumes, I have used the concept of the entire performance, i.e. patchwork and recycling, which gave me a plenty of freedom to play with different patterns and epochs, and thus to assign to each character a colour and contour that enrich them visually and semantically.

ABOUT THE MUSIC
I have developed the inspiration for music based on the idea that this tale takes place in the Lost Empire at the end of the world. There is no original creation in such an environment, but only the recycling of familiar songs. The music itself was created by combining different rhythms produced by various wooden and metal objects that can be found in a landfill, which, in combination with electronic sounds, generates the music that entertains and animates in the spirit of comedy.